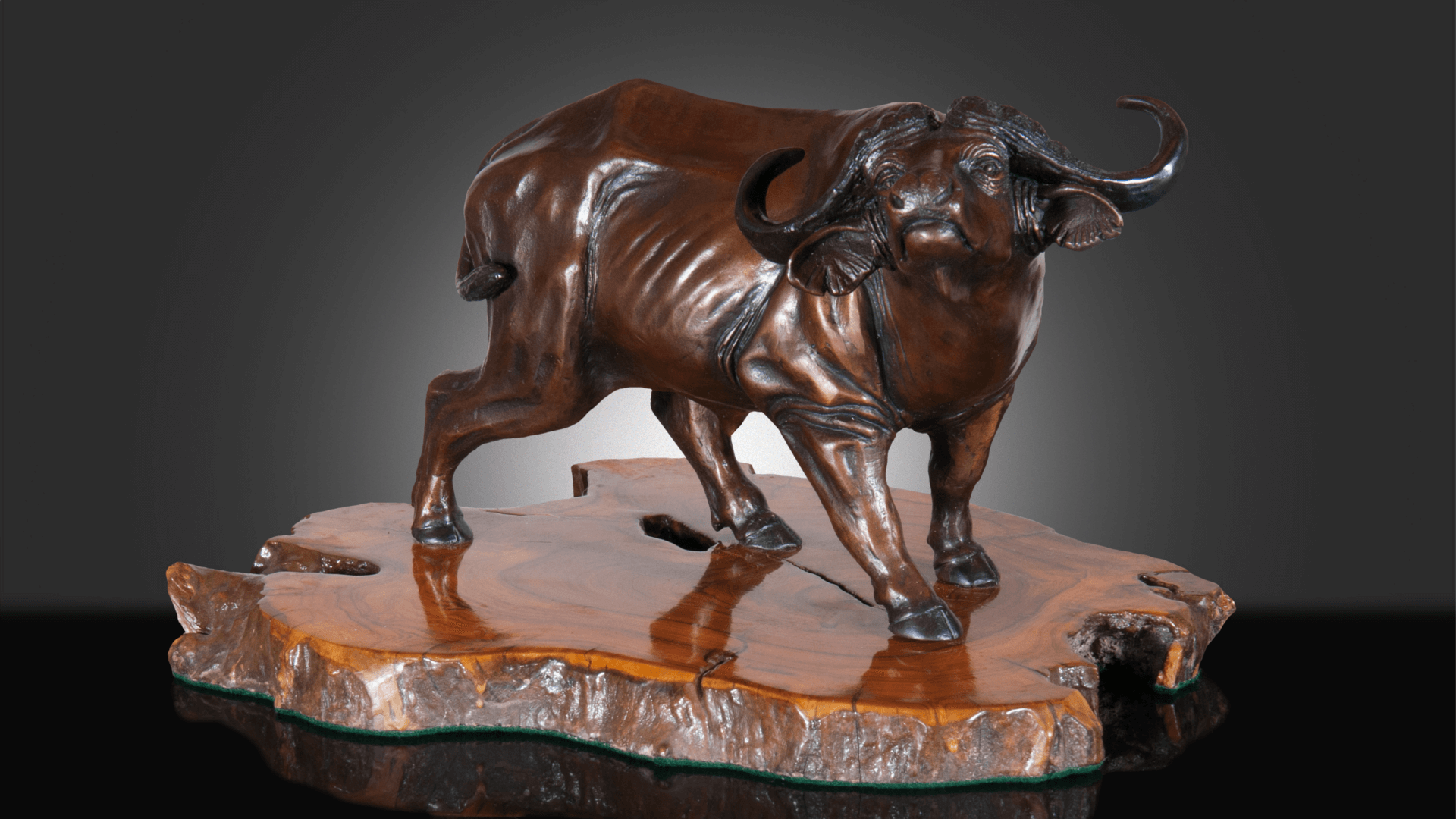 Danger in the Air

The African buffalo made its way into the Big 5 ranking because of their size, moody behaviour and their ability to charge with no warning, the African buffalo has been said to be one of the most dangerous animals to hunt on foot.

It can be easy to see why as these enormous bovid weighs in at 800 kg for a male and 750 kg for a female.

Buffalo are very easily recognizable on a game drive as they are a large ox-like looking animal with very large bossed horns. Buffalo are dimorphic which means there is little difference between the male and the female.

Male buffalo are often covered in mud and their bosses met in the middle of their head to form a helmet-like structure on the head. Younger bulls often still have hairs on their horns.

Female buffalo are more of a red-brown in colouration and have more narrow horns. Female buffalo have a gestation period of 11 months and mating takes place during the late summer. Buffalo will try to have their calves in the rainy season when there is plenty of green grass, rich in nutrients, to support lactating cows. Cows normally give birth every two years. A calve can stand within in ten minutes of being born – a typical trait because buffalo are always on the move for food and water.

Buffalo have a lifespan of roughly 23 years; they are ranked in their herds by their fighting capabilities. Buffalo will often have head-on clashed to determine rank in the herd. The hide on the buffalo’s neck can be as thick as inches to protect it during battles with other male bulls for dominance.  Dominant individuals will feed ahead of the rest of the herd or in the middle and gets the best nutrient-rich grass and best access to females in oestrus. Buffalo are subsequently led by “pathfinders” (not necessarily dominant animals). Pathfinders act as a leader to the herd and determine where the herd will move.

As buffalo get older and their reproduction peaks pass males will often be chased from the larger herds and are often found in small groups or on their own. These animals then get the nickname Dagha boys. Dagha is the Zulu name for mud and refers to the buffalo spending a lot of their past time in mud wallows.

Buffalo are gregarious and live in mixed herds often numbering hundreds of individuals. They are not territorial because they are bulk grazers and need to find suitable grazing and water on an ongoing basis. Buffalo consume very coarse material and therefore require as much as twice a day. A buffalo can consume 35 liters of water at a time in a matter of minutes. Buffalo have an excellent sense of smell and can use this sense to find food or detect danger and predators nearby.  These incredible animals can also swim, and will cross rivers into areas better suited for grazing.

When a buffalo feels threatened they can alert the entire herd – the calves and cows are sheltered in the center whilst the stronger males put on a united front, this is very intimidating for predators and often work in the buffalo's favour. The buffalo will mob or intimidate predators and if necessary stampede. Buffalo try to always stay in the herd and have been very successful in defending the herd-like this, even if faced with a pride of lions.

Lion will often prey on the weaker, older individuals, the Dagha boys, as they are often solitary and weaker from age.